Community the focus for Christmas in Mansfield 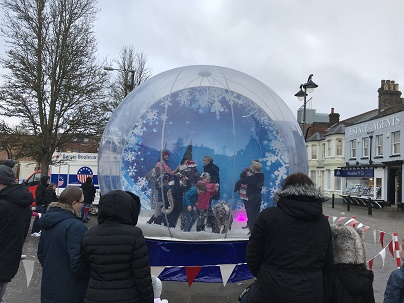 Christmas in Mansfield will be spreading festive cheer in a series of community-focused events this year.

Mansfield District Council took the decision in April that, in the light of the likely ongoing COVID-19 situation, instead of a big Christmas lights switch-on event, it would be safer to run a variety of reduced capacity attractions.

These will include a free family event called the Mansfield Winter Festival in Titchfield Park in December, various free town centre entertainments and a tour of a giant inflatable snow globe around neighbourhoods in the district.

The council will also lead a community gift appeal to support vulnerable local people and is a financial partner in Mansfield BID’s Christmas Market.

There will be a small ceremony in the Market Place, led by Executive Mayor Andy Abrahams, on Saturday 27 November, to open the Christmas in Mansfield campaign.

He will also be launching a community Christmas gift appeal which will run until mid-December.

Mayor Andy said: "Although we could not have been sure back in April how the land would lay regarding Covid in November and December, it was a good call to cancel the Big Switch-On and to arrange alternative events that would not involve squashing thousands of people into the Market Place.

"Our aim for the Christmas in Mansfield campaign this year is to put a focus on the community - to support vulnerable people who may have been in real difficulty due to the pandemic.

"We want to bring Christmas cheer to boost morale and encourage neighbourly togetherness as well as to improve health and wellbeing in the district."

The community support efforts will include a repeat of last year's successful and popular Secret Santa Appeal in which people can take presents to various drop-off points to be distributed to families and people in need in time for Christmas.

One of the main Christmas in Mansfield events will be the  Winter Festival in Titchfield Park on Saturday 18 December with Christmas movies, a children’s party and a Santa meet-and-greet in a heated marquee.

The marquee events would be ticketed sessions for up to 750 people at a time. Tickets would be free though people will be encouraged to make a donation to a community appeal.

Early booking is being recommended as these tickets are expected to be quickly fully allocated. Details of where and how to book will be released soon.

Outside in the park there will be a snow machine, food vendors and walkabout entertainment for all to enjoy.

In the town centre the main event will be the I love Mansfield Christmas Market, delivered by Mansfield BID and funding partner Mansfield District Council, from 27 November until 22 December.

There will be 12 chalets along West Gate selling the perfect Christmas gifts such as candles, jewellery, toys, and ornaments. There will be a special wine bar this year, too, serving all sorts of festive tipples.

Sue Rogers, from Mansfield BID, said: "Christmas is coming back to Mansfield town centre and we're delighted to be putting together a fabulous market. We would urge Mansfield people to really support the events and the town's businesses in the run-up to Christmas."

Various "ambient" attractions will feature in the town centre in the build-up to 25 December, including a 7.5m light tunnel leading to an illuminated town hall where people can drop off gifts for the Secret Santa Appeal or post a letter to Father Christmas.

The Market Place will also play host to special late night shopping markets on Thursdays in December and there will be walkabout entertainment and live music on specific dates.

As well as the familiar Christmas tree in the market square, there will also be new festive decorations lighting up the Old Town Hall.

Outside the town centre, at the end of November and on Saturdays during December, a giant inflatable snow globe, in which people can take selfie photos, will pop up in various neighbourhoods, including Pleasley, Warsop, Oaktree, Ladybrook and the Bellamy estate.

To be the first to know full details about what’s on and events in Mansfield, sign up on your website to receive emails (link opens in new window).