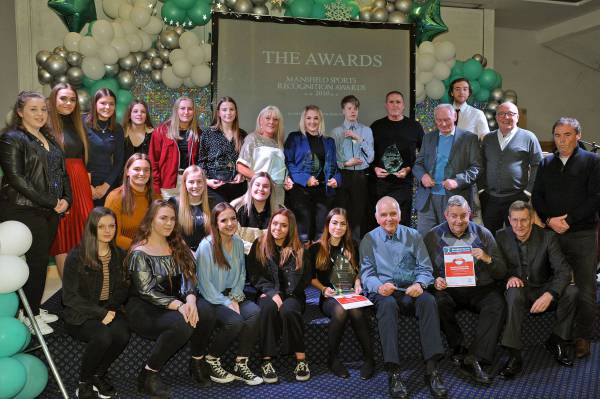 Double World Champion para-canoeist Charlotte Henshaw has been named Sportsperson of the Year at the Mansfield Sports Recognition Awards for the second year in a row.

The former champion para swimmer turned para canoeist also picked up the Disabled Sportsperson of the Year title, again for the second year in succession, at the awards ceremony attended by about 300 people at the Civic Quarter on Monday 9 December.

After a successful career as a swimmer, Charlotte switched to canoeing two years ago and has already risen to the top of her new sport, having an outstanding 12 months with her sights now firmly set on success at the Tokyo Paralympics next year.

In August, at the ICU Para Canoe World Championships in Hungary, she won gold medals in both the VAR-VL2 Category and KL2 (Kayak) category, breaking the world record for both events. She also had success at the European Championships and World Cup events and is now the ranked the world's number one paddler in her categories.

David Evans, Head of Health and Communities at the council, said: "Congratulations to Charlotte for winning these awards. What a worthy winner and great ambassador for Mansfield's sporting success she is".

"To make four Paralympic Games and move so seamlessly from being top of her game in one sport to a success story in another, truly is a remarkable achievement and we wish her continued success".

"We hope all the winners and nominees inspire others to discover the joy of getting fit and active".

"The council is pleased to be involved with this event, which is in line with its wider strategy to encourage more people in the district to become more physically active".

"The awards honour the unsung heroes, too, like the coaches and club officials. The community owes so much to all those people - usually volunteers - who work hard to provide such a fantastic array of different sports in this district - from petanque in the local park to nurturing Olympic and Paralympic champions. Without these people, there would be no sport."

Organised this year by the Armchair Club, in association with Mansfield District Council, Mansfield and Ashfield News Journal and Mansfield 103.2, the annual awards attracted more than 40 nominations.

The ceremony was opened by the Executive Mayor of Mansfield Andy Abrahams who also presented the Roger Copestake Award for the Mayor’s Special Achievement, which recognises work in promoting sport within the district.

It went to Phil Peat, who has contributed to sport over the past 40 years, first as an athlete and then as a coach. He represented Great Britain and Northern Ireland at 14 major competitions and has coached athletes to success at European and World Championships as well as the Paralympic Games.

Another special award on the night was the Ian Bagshaw Memorial Award, presented in memory of Water Meadows manager Ian Bagshaw, who lost his life to leukaemia in 2014, aged 57.

This year the winner was Linda Bennett who has been a swimming coach in Mansfield for more than 30 years. She helped to form the Sherwood Seals Disabled Swimming Club. She taught Charlotte Henshaw and Rebecca Adlington when they were children.

Sportsperson of the Year, sponsored by Education Mutual: Charlotte Henshaw.

Junior Disabled Sportsperson of the Year, sponsored by Mansfield District Leisure Trust: Callum Mills, an ice skater who competed in Glasgow, winning gold medals in the Elements, Pattern Dance and the International Freestyle categories. He also competed in Edinburgh and won gold in freestyle skating, freestyle dance and pairs categories.

Club of the Year sponsored by Fidler and Pepper: Mansfield Senior Reds Walking Football Club, which won a number of tournaments in 2018/19. There were two Mansfield tournament successes, followed by wins at festivals held at Dronfield and Belper. The club also travelled to Spain where they won an over- 65s tournament and were runners-up in the over-50s. The club also raises funds for local charities.

Team of the Year, sponsored by Adkin Sinclair: Sherwood Wolf Hunt Rugby League Football Club which has enjoyed a successful season in the Midlands Premier Division, winning a hat-trick of titles - the Midlands Cup, League Leaders and the Grand Final Champions.

As a result of this success, the Rugby Football League invited the team to represent the Midlands in the sport's most prestigious and famous cup competition, the Challenge Cup, competing against top amateur teams from the UK, Ireland, France, Serbia, and Canada.

Junior Team of the Year, sponsored by Hall-Fast: Mansfield Rugby Club U18 Girls, which despite being in only their second season, won 22 out of 24 games and became Midlands Area 4 and North of England champions.

Six of the team were invited to the England U18s camp, resulting in Georgina Tasker making her debut for the England team, playing against Scotland.

Coach of the Year, sponsored by Collins Wealth Management: Paul Godson, who is a primary coach to the successful middle distance athletics squad at Mansfield Harriers.

He coaches 60 athletes, aged between 12 and 20, in all weathers at least three sessions each week.

This year, six members of his squad represented Nottinghamshire at the English Schools championships and in recent years, 10 athletes from the squad have gained international representative honours. Seven have gained athletics scholarships to American universities.

Volunteer of the Year, sponsored by Pinders Opticians: Barry Holmes who has been secretary of Mansfield Harriers since 2002.

As well as attending club training sessions, he also takes on the lion's share of responsibility for running the club. His work includes everything from booking venues and first aid providers to dealing with correspondence, committee meetings, kit and equipment purchases, membership applications, competition entries and training fees.

He also sits on the General Committee and Finance Subcommittee of Notts AAA, is secretary of the Notts Mini League and a member of the National Executive Committee of the Young Athletes Development League.

This year he won the Officials category at the England Athletics Volunteers Awards 2019 – East Midlands.

Junior Sportsleader of the Year, sponsored by the Mansfield and Ashfield News Journal: Harlie Blagg, of Meden School, who has supported many primary school sports events.

Harlie represented her academy at the Notts School County Games and supported the event logistics, including registering over 1,000 students and reading the athletes' oath at the opening ceremony.

She also helps at her school by supporting after school clubs, fundraising and is chairperson for the Women's Association.