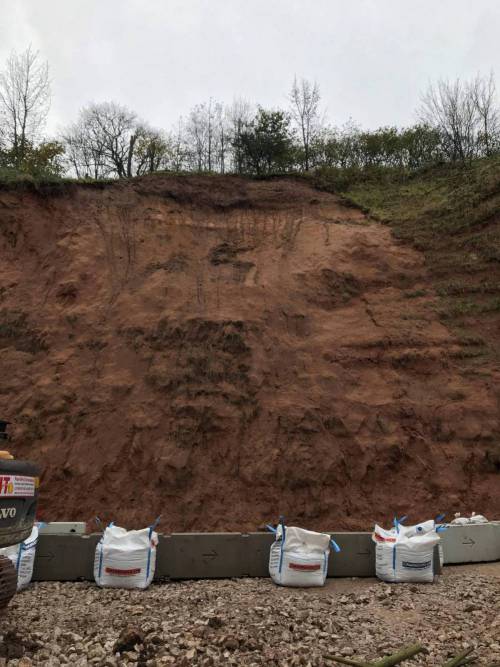 The 19 households who were evacuated from their homes after the land slip at the former Berry Hill Quarry site have returned to their homes.

Work continues to find a long-term solution to stabilising the cliff face.

60 people have been evacuated and been living with friends and family, or in temporary accommodation arranged by Mansfield District Council, since 1,300 tons of sand and rock slipped at the site on 7 November

They were allowed to return to their homes at 1pm today and greeted with a welcome home parcel of essential food items provided by the local One Stop convenience store.

The residents were informed of the plans to allow them to return home at a 90-minute meeting attended by 37 homeowners, landlords and tenants, at the Civic Centre, on Wednesday. They were also given information about what will happen next regarding stabilising the cliff face and work to mitigate against any future risks to their homes.

Mike Robinson, Strategic Director of the council, said: “The residents were understandably concerned about the future but they were also extremely grateful for all the help and support they have been receiving from the council's emergency response team since this incident.

“As well as providing those who have needed it with temporary accommodation, the team dealing with this has been in touch with all affected residents every day by phone, email or text.

“I am really proud of how our dedicated staff stepped up the plate and often went beyond the call of duty to help the people evacuated.

“One officer fed a rabbit for week which belonged  to one of the families but which could not be moved out for a while. Other officers managed to retrieve washing that had had to be left on washing lines, and even took them home to launder them before returning the clothes to the residents.”

At the residents’ meeting, families were told by Paul McMillan, of geotechnical experts Fairhurst,  about what work had been completed and what they could expect in the coming weeks.

They were asked by the council to be as co-operative as possible, including allowing contractors on to their land to allow the work to move forward. A stone path has been laid and a Heras safety fence put up in the buffer zone and in the gardens of some of the properties to enable the work to proceed.  Residents have been asked to stay out of their gardens as much as possible.

It is hoped that a design for stabilisation work will be ready before Christmas. The council will be staying in regularly contact with them regarding the future work and cliff face will be inspected weekly to assess its integrity.

Mike Robinson said: “The land slip was an unforeseen event that was caused by extreme climatic conditions. Our main aim now is to stabilise the cliff to safeguard people’s properties and mitigate against any future risk of land slips.

“As we told residents at the meeting, the planning history of the site goes back to 1998. We have studied all the documentation regarding the planning process and we are confident that all the correct investigations were completed prior to planning permission being granted and that all planning conditions that applied to the site were fulfilled.

“In the immediate future,  while there is still some site clearance work to do and some trees to remove, we just want to help residents to move back into their homes  and help them pick up their lives and get back to normal.”

Residents affected by the land slip have claimed £120 from Nottinghamshire County Council’s Flood Hardship Fund and the council is arranging for them to receive £500 per household from the Government’s Community Relief Grant which is being paid to local authorities affected by the reason extreme weather. The affected households will also receive council tax relief for the period of their evacuation.