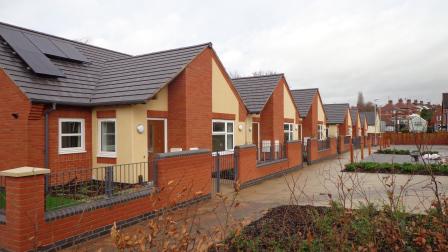 Mansfield District Council is set to double the number of new council homes being built over the next four years.

The Full Council on 19 November is due to consider a £51.9m plan to build 300 affordable and energy efficient council homes, adding to the plan for 147 that was agreed last year.

Jill Finnesey, the council's Head of Housing, said: "This is an ambitious plan aimed at helping to meet the need for affordable housing in this district.

"These plans align with the council’s strategies for Growth, Place, Aspiration and Wellbeing, and complement the council's efforts to encourage private developers to grow the housing market in Mansfield and enhance the district as a great place to live.

"They also aim to help people wanting to take their first step on the housing ladder as affordable shared ownership properties will be among these new homes.

“The properties will be built in line with the council’s climate change agenda by being sustainable and energy efficient and the construction of them will provide employment and training opportunities for local people."

The council has built 226 new homes since 2010 at a cost of £30m (£20m after grants and other sources of funding) through its Housing Revenue Account.

Previously Government caps on borrowing limited the amount councils could borrow to build new homes. Recently relaxed rules on loans have now allowed the council to borrow against its property assets to expand its rented housing stock further.

Now the council wants to adapt the building programme again, to reflect changing priorities, and provide 299 homes at a cost of £51,909,000 by 2024. The number of homes may alter as the programme is progressed by the council’s in-house architectural service.

They include at least 100 new homes in an expansion of its acclaimed Poppy Fields development for older people, and an estimated 80 homes through acquisition, development and renovation as part of a masterplan for the town centre and other strategic sites.

The new housing will provide family homes as well as helping to address the district’s need to cater for a growing ageing population, which increased by 22 per cent between 2006-2016.

Studies have shown that Mansfield also has a higher-than-average proportion of lone parent households and higher-than-average numbers of people with disability, mobility and long term health conditions. Bungalows and ground floor accommodation will be included in the housing mix. There will also be priority support for veterans of the Armed Forces.

The council’s new proposed Local Plan estimates that the district will need 6,500 new homes between now and 2033. There are currently more than 3,500 households in some form of priority need in Bands 1, 2 and 3, on the council’s housing register in Mansfield.