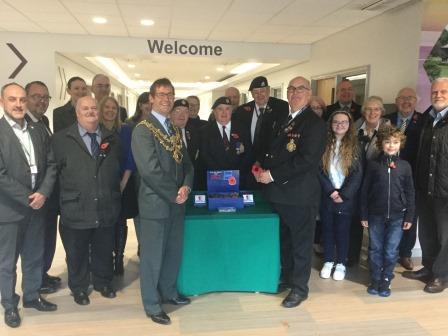 Poppy Appeal organiser Mick Beresford and Joe Martin from the Mansfield branch of the Royal British Legion (RBL), were joined by members of the RBL councillors and senior officers of the council.

Over the last two years, the council has encouraged local knitters to provide handmade poppies to decorate the Old Town Hall. This year our dedicated supporters have donated a thousand more poppies to create garlands and wreaths to be displayed around Mansfield Town Centre next weekend ahead of the popular Remembrance Day Parade.

The parade on Sunday 10 November starts with a wreath-laying ceremony at the Civic Centre war memorial at 10am. The parade route is slightly different this year; the parade will meet at the Civic Centre and then head along Rosemary Street to the Magistrates’ Court. Turn left along Westfield Lane to the feather statue then on to Westgate and into the town centre.

This is for safety reasons and to avoid closing a large number of roads and side streets along Chesterfield Road South. It also allows traffic to flow to and from the supermarket.

After the church service, there will be a military salute in the Market Place in front of the impressive knitted poppy display on the Old Town Hall at about noon before the parade returns to the Civic Centre.

Road closures will be in place from 10am to midday along the main route whilst the parade passes through the town centre. Once the parade has passed safely, road closures will be lifted with the exception of a full closure on Church Street/Toothill Lane junction and Church Street/White Hart Street junction to allow a safe space for the parade and members of the public to take part in the event. Please allow more time to travel that day.

Mayor Andy said: “I am so very pleased to support the Royal British Legion and to rally support from Mansfield people to give generously to the annual Poppy Appeal. The town will be full of handmade decorations again this year, demonstrating the love and respect local people have for our fallen heroes. I shall wear my poppy with pride.”

Other Remembrance events in the district include: