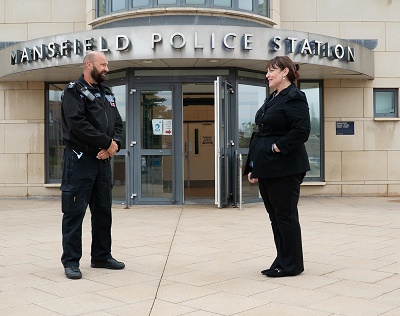 A major new project is underway to boost safety in Mansfield and make it harder for criminals to strike thanks to a £462k funding windfall.

Nottinghamshire Police and Crime Commissioner Caroline Henry has secured £462k from the Home Office’s Safer Streets Fund to step up efforts to tackle street crime and burglary in the Portland and Woodlands wards of Mansfield so that people feel much safer across the town.

The Commissioner is working together with a team of partners including Nottinghamshire Police and Mansfield District Council to deliver a series of high-tech improvements including new fixed and re-deployable 4G CCTV, additional Automatic Number Plate Recognition (ANPR) technology and extra monitoring hours to keep residents safe.

Cash has also been set aside to install improved street lighting and deliver free security upgrades at up to 150 properties in the area while the force will deliver extra high-visibility police patrols around the top ten hotspots for burglary, vehicle crime and robbery, creating dedicated Safer Streets teams consisting of police officers, Special Constables and Wardens.

The grant will also fund the appointment of a Burglary Reduction Officer to work with Mansfield residents and deliver security improvements which could include five level door locks, window alarms, sensor lighting, toughened windows/doors, secure side gates and sensor-activated WIFI or 4G CCTV.

Commissioner Henry said: “This is great news for Mansfield and will help us to stop crime before it happens – sparing residents and potential victims unnecessary loss, distress and fear.

“These areas of the town have already been identified as needing additional help to protect people and their property and through this funding we can now make a tangible difference.

“Together, we need to take a stand against criminals and reclaim our streets – that is why I was elected. With the full support of our partners, I aim to make life infinitely intolerable for those who bring misery to our communities and have no regard to the law.”

Councillor Marion Bradshaw, Portfolio Holder for Safer Communities, Housing and Wellbeing for Mansfield District Council said: “We want people in Mansfield to live safe and healthy lives and we will work with partners to understand and respond to the needs of our community. This pot of funding from the PCC will help to prevent crime in targeted areas around the town centre and undoubtedly improve the quality of life for those living there.”

Chief Inspector Steven O’Neill, who leads on community policing in the town, said: “This new funding gives us an exciting opportunity to further build on the great progress we have made in recent years in making Mansfield a safe place to live and work. What this funding allows us to do is to respond on a hyper-local level to combat very specific types of crime such as burglary, robbery and vehicle crime.

“Burglary in particular is an incredibly invasive and upsetting crime that can have a lasting impact on victims. This new funding will allow us to put in place innovative preventative measures that will help to stop burglars in their tracks before they can gain access to people’s homes.

"In practice this may include us fitting doorbell cameras, improved locks and PIR lights to properties in affected areas free of charge in order to target harden residential properties. This approach has proven successful in other areas of the county and I am looking forward to rolling this out in Mansfield.”

Alongside new technology, the project will deliver environmental improvements across the key areas during a series of action days incorporating cleansing and grounds maintenance to make the locations feel and look safer.

Project leaders will also look to increase resilience and engagement in the community encouraging the uptake of Neighbourhood Alert and launching additional Neighbourhood Watch groups in the area.

Nationally, the Government has announced a £18.3m windfall as part of its Safer Streets Fund.

A total of 40 areas across England and Wales have been chosen to receive grants in the project’s second phase to tackle neighbourhood crime and clamp down on burglary, robbery and vehicle theft.

The cash will fund measures proven to cut crime including simple changes to the design of streets such as locked gates around alleyways, increased street lighting and the installation of CCTV.