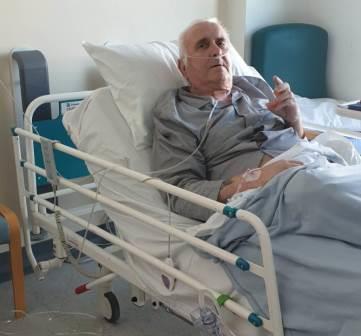 The wife of a Mansfield man who was in a coma for 10 weeks as a result of COVID-19 has urged people to stick to the lockdown rules to protect themselves and their loved ones.

Wanda Freeman’s husband Paul (63) spent 98 days in hospital and was lucky to survive.

“People think COVID-19 is a bad flu - it’s not. Before Paul became ill I didn’t know anyone who had contracted it and I would have been one of those people who thought it would never affect us,” said Wanda.

“COVID-19 is very real and can have serious consequences. It’s not worth risking the heartache we’ve experienced to meet up with family or friends. I’d urge people to take it seriously and stick to the rules.”

Paul’s recovery is ongoing as he deals with the effects of long Covid. Wanda said: “Covid has ravaged Paul’s body. His kidneys and lungs are damaged, his upper body is so weak and doing simple tasks leaves him exhausted. He’s such a clever bloke but now he suffers from brain fog and can’t remember people’s names or even what he had to eat an hour ago.”

Back in March, Paul, who has been a bricklayer at Mansfield District Council for 43 years, had been feeling unwell for about a week but didn’t have any obvious symptoms of coronavirus, such as a cough, temperature, change or loss in taste or smell.

On Monday 23 March, the couple who have been together for 23 years and married for 18 years were watching TV when Paul developed a sudden fever with a temperature of 40 degrees and had difficulty breathing. An ambulance was called to their Mansfield home and Paul was taken to King’s Mill Hospital where he later tested positive for COVID-19.

Wanda said: “He was a bit breathless but there was nothing to be too concerned about. But in the early hours of Wednesday his breathing got worse and he was put into a coma.”

Wanda, who had to self-isolate for two weeks in case she had COVID-19, relied on telephone updates from the hospital. “The hardest part was that I was on my own. Before then Paul and I had only been apart when we were at work. I phoned the children four times a day and not being able to see each other when we were all so distraught was horrendous.”

After 13 days, she received a call saying Paul’s kidneys were damaged and he was being transferred to Lincoln County Hospital for more specialist treatment. “He deteriorated again and we thought he wasn’t going to survive. I wasn’t sleeping and was preparing myself for the worst – it was terrifying. Every time they attempted to wake him up his blood pressure rose and on each occasion they said he wasn’t ready yet and put him back into a coma.”

Unable to visit due to COVID-19 visiting restrictions, hospital staff kept Wanda updated by phone and sent her a knitted red heart keepsake along with a letter telling her that Paul was holding a red heart in his hand.

It was two-and-a-half months before Wanda saw Paul via FaceTime and it was 27 June – Paul’s birthday – when she visited him for the first time.

“It was quite upsetting. He didn’t know me, which was heartbreaking. He had been well built but now he looked so old and fragile,” she said.

The first real glimmer of hope came when Paul’s first words to Wanda were to ask if she’d paid the rent. “I knew for the first time that he was ok and I couldn’t wait to tell everyone,” she said.

Paul’s recovery took time and some days were better than others. “He was like a baby, having to learn to walk and talk again. Even holding a pen was a big struggle,” she said.

Paul was transferred back to King’s Mill Hospital before finally being discharged at the start of July.

“The staff lined up to clap as he left the ward and when we got home everyone on the street was out clapping, which was lovely,” Wanda said.

Paul has no memory of being ill. “I think it’s a good thing he doesn’t know anything about it because some people who do remember have nightmares. But it’s frustrating for him because he’s lost three months of his life.

“I have photos of him that were sent to me when he was on a ventilator but he doesn’t like looking at them or even talking about it.

“His grandchildren sent me video messages of them blowing kisses to Paul and willing him to wake up but it’s been too upsetting for him to watch them yet,” Wanda said.

“Paul’s very lucky to be alive. It was definitely a sign from above – somebody was looking down on him. I think Paul’s illness and the first lockdown was God’s way of making sure I got to spend more time with Daniel.”

Executive Mayor Andy Abrahams said: “What Paul and his family have been through is not unique. There are people in our district who have similar stories and others who have not been so lucky. I’d like to thank Paul and Wanda for sharing their experiences to help people understand the reality of COVID-19 and the importance of following the rules to slow the spread. Please stay at home unless it’s essential, and remember hands, face, space.”