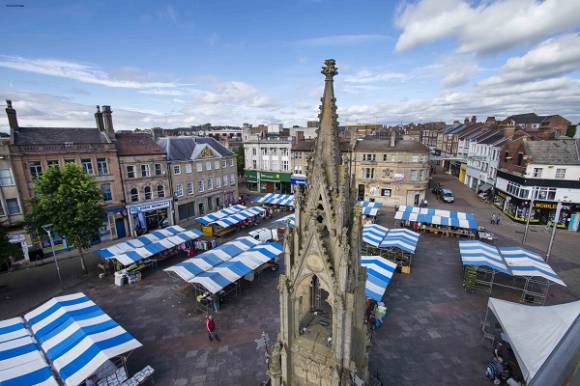 Mansfield District Council has been successful in its bid for £1m to create new urban pocket parks in the town centre.

It is hoped the government funding will help to create small green spaces in the coming months to help boost visitor numbers and encourage visitors to spend more time in the town centre.

The scheme could open up darker, less inviting gateways to the town, such as Stockwell Gate.

Among the options for how the funding could be spent include:

The funding has to be spent before the end of the current financial year in April 2021 to kick-start investment coming to Mansfield from the government's Towns Fund.

Mansfield's bid to the Towns Fund is for £25m and supports a council programme of district wide investment as well as a new town centre masterplan. These projects also support the council’s strategic priorities for Growth, Aspiration, Wellbeing and Place.

Cllr Stuart Richardson, Portfolio Holder for Regeneration and Growth, said: "We are so pleased to have been given the go-ahead to take this exciting project forward.

"Mansfield is performing well in the economic recovery from the COVID-19 setback and these proposals will certainly help further.

"This scheme supports a council priority to improve the green environment in the district. Bringing more, much needed greenery to our town centre can only be a good thing - and this will not cost local council tax payers anything."

The new pocket parks and "urban greening" would boost Mansfield's bid for £25m from the government's Future High Streets Fund.

This funding would support the council's emerging Town Investment Plan to revision the town centre in the face of changing national trends in the way people shop. It includes re-imagining uses for the Market Place.

All these schemes fall under the government's levelling up agenda to support regions that have not benefited from the economic upturn enjoyed by other areas of the England.

The Mansfield "greening" proposals were submitted to Ministry of Housing, Communities and Local Government after being unanimously supported by the Place Board.

The Board comprises councillors, council officers and key stakeholders, such as Mansfield BID and other local partners. It was set up last year to steer the district's vision for the future.

Cllr Richardson added: "Mansfield is on the cusp of some major investment which will help place this district in the best possible place to face the changes and challenges of future years.

"I would like to applaud our council officers who have worked so hard and extremely quickly to land this £1m in funding. Now the work to put the project ideas into reality begins."