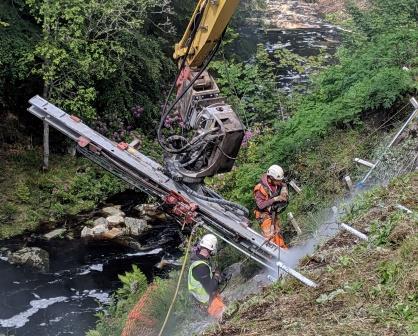 All residents and landlords of premises who were directly affected by November’s landslip were invited to the Civic Centre to meet with the council’s senior leaders; Fairhurst the council’s appointed geotechnical experts; and the Berry Hill Project Management team.

At the meeting, residents were presented with a range of options, which had been assessed by Fairhurst, and the preferred option that was chosen as being the most appropriate for Berry Hill.

The preferred option uses a combination of anchored mesh on the rock slopes and a 2.5m high strength fence to stabilise the quarry faces and protect residents and homes.

Mansfield District Council has requested financial support from the government to fund the project which could cost as much as £5m.

“The proposed permanent remedial works will address the risk from future small and large scale failure to protect residents and homes at Berry Hill Quarry.

“This type of approach is tried and tested and commonly used to deal with slope instability adjacent to roads, railways and buildings and as such is considered the optimum solution for Berry Hill.”

The scheme requires the full support of local residents to allow for buffer zones, held in their land titles and in some cases some small sections of garden land to be gifted to the council so that works and long term maintenance can take place.

“Ownership of the cliff face and surrounding land has been very ambiguous in the past. However, since the landslip in November last year, the council has reviewed its legal position and taken on responsibility for the cliff face and cliff top that surrounds Bank End Close and Stone Bank.

We are now working with residents and landlords to move the project forward and make the area safe for the long term.”

“A significant amount of money is needed to stabilise the cliff face and the council already has financial challenges to overcome. We have asked the government for additional support and continue to have discussions with the Ministry for Housing, Communities and Local Government.

“We are grateful for the support of our MP, Ben Bradley, and the direct conversations we have been able to have with the Secretary of State. We’d also like to thank residents for their continued patience and understanding.”

It is anticipated that work will start later in the spring following a formal tender process.

Residents in the area have been given a dedicated telephone number and email contact for the Berry Hill Project team along with emergency out of hours contacts should they see or hear anything that concerns them regarding the condition of the cliff face.